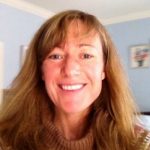 Marcela Kandanka hails from Toronto. She has two School Scrabble kids, aged 12 and 14. After a few Orlando nationals, they wanted to try adult tournaments. After spending eight hours on a weekend driving /watching, she decided to join them, “for her own sanity.” She adds, “Now, I play way more than advisable for anyone’s sanity, and certainly more than my kids, though my son Will Robertson, now 19, is playing with me in these Nationals.”

Marcela is multi-talented: people have paid for her paintings; she has completed three marathons without talking; and she makes a mean Pad Thai. Look out for her in Division Three – she may be the female doppelgänger of Louis CK.