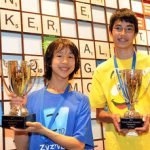 He first got into Scrabble in 5th grade when friends suggested he join them at an after school Scrabble club. As the school bell had already rang, he had a minute to decide between taking the bus home and going to the club. Looking back, he feels tha 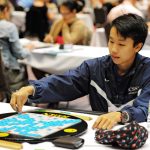 t he’s made the right choice.

For every game that he wins at the NASC 2016, Andy will donate money to the Honduras Foundation. He’s tweeting from the NASC at @RealAndyHoang.